In 2010, Ben and I took a trip to Charleston, SC for my friend Rachel’s wedding.

Prior to the wedding, we walked around downtown Charleston and took in some views of the river.

Never did I imagine that I would swim in that water, alongside that pathway and right past that military ship.

Sometime time around early Spring I decided that I wanted to do the 4th annual Swim Around Charleston, a 12 mile swim from Mt. Pleasant to Charleston in the Cooper River and Ashley River. I knew some people who swam the event last year and just couldn’t make 2013 happen due to scheduling. I started off this year training pretty well, but with the addition of marathon training, teaching swim lessons, work.. and sleep… I definitely slacked on the training the last 5-6 weeks. No one else in my group was up for the swim the year and my kayaker friend backed out last minute, so I came close to deferring my entry until next year. But, alas, I decided to suck it up and make the trip on my own. 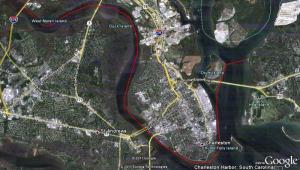 Saturday, the day before the race, we had a pre-race meeting. I woke up so sick that morning (thanks to Ben for giving me his cold) and drove the four hours to Charleston. I someone managed to sit through the meeting, though all I wanted to do was lay myself on the floor and sleep. After the meeting, I grabbed food to-go and ate dinner in my hotel room. I was in bed by 8pm. So much for enjoying the city.

I woke up Sunday feeling much better and ready to swim, but terrified. I don’t think I’ve ever had so much anxiety over a swim. Maybe it was the distance, maybe it was the fact that I knew I was low on energy from being sick, but I think it was just the concept of jumping into a new body of water. I know the St. Johns River – I know the way the water feels, I know the current, I know every single bridge and dock. I feel safe knowing everything. The Cooper and Ashley Rivers were completely unknown to me.

Because of the tides, our race didn’t start until noon. A shuttle took us from the hotel to the start around 10:15am. I met some wonderful people on the bus who chatted my ear off about other swims they’ve done, which helped me forget about my anxiety for a bit. When we got there, everyone immediately lathered up with sunscreen and grease while I just chilled and watched the water. We had plenty of time to kill. Eventually, I found my assigned volunteer kayaker, Leslie. This was Leslie’s third time volunteering; she was confident and knew what she was doing/where she was going… this was such a huge help for me. I handed Leslie my drinks, snacks and extra caps/goggles (changed both mid swim – goggles wouldn’t sit right and cap ripped when I readjusted) then lined up with everyone else for the start.

This was an in-water start, so we were checked off as we jumped off the dock and waited in the water until the horn went off exactly at 12:00pm. The start was a little chaotic because I was trying to get off the feet of two women (later nicknamed by Leslie as “the twins”) and not lose my kayaker at the same time. Within 20 minutes, the group had spread out and we were already under the 1st of 5 bridges.

I felt great the first two hours. I forced myself into feeds that I didn’t really want to take at 12:30pm and 1:15pm. I had been warned over and over again about staying hydrated, so I tried my best to stay on schedule. I took my 3rd feed at 2:00pm, still feeling pretty decent. There was lots to look at – Charleston is beautiful from the water. We had a nice current pushing us forward and I had made it past the 1st check point 20 minutes ahead of the cut-off. Then, we turned the corner and hit he wind. The wind… the head wind that stayed with us on and off for pretty much the remainder of the swim. The wind made the water pretty choppy –  more choppy than any year before, per my kayaker. Due to chop, boat traffic and bridges, my next feed wasn’t until almost 3:00pm. By then, I started to get a little tired. When I say “tired” I usually just mean my arms.. at some point, they just don’t want to rotate anymore. I learned something during this swim though: if you’re thinking of taking a feed “soon”, just go ahead and take it now. You don’t know what conditions “soon” might bring and you might have to push the planned feed back further than preferred. 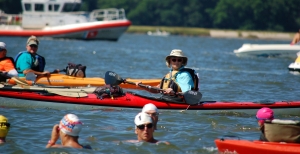 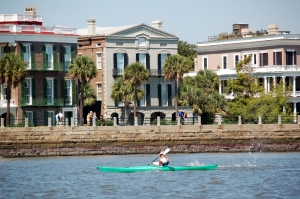 That “I don’t want to rotate anymore” feeling came a little too early at 4:00pm. I had stopped for  3:30 feed and again at 4:00pm and told my kayaker I was done. She chuckled at me and moved me along for another 30 minutes. I gave a big heaping sigh at 4:30’s feed, but Leslie pointed out that “pink cap and the twins” (people who had been behind me for a while now) were still behind me and “paddle board guy” was not too far ahead. I was thankful for the entertaining nicknames and the reminder that I wasn’t the only one out there. I pushed it along to 5:00pm and caught up to paddle board guy (swimmer who had a paddler and a boat instead of a kayak escort.. what was that all about?). I thought maybe I had a surge of energy upon catching him, but it only lasted 10 minutes. With the final bridge in sight, I literally didn’t think I could continue. Each stroke burned, my arms were heavy and even my fingers tingled. My muscles were shredded and there was no racing anyone to the finish. I stopped a lot (non swimmers take note: when stopping you may not hang on to anything, you must tread). Paddle board guy had been swimming further out in the channel, so he had a nice current pushing him.. I chose to remain closer to the shore and he ended up pushing ahead. I didn’t care.. I just wanted that damn dock to appear. It felt like a complete “joke’s on you! haha!” situation where someone kept pushing the marina further and further away from me. How could I have the bridge/marina in sight for this long and not be there yet? 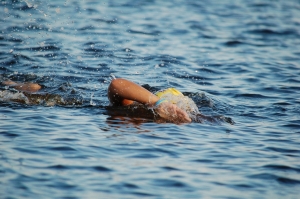 Pruned to the Extreme

Finally, balloons appeared and I was yards away from the finish dock. In somewhat of a haze, I very (and I mean VERY) slowly moved one arm at a time until I was told my chip had registered (by the way, my sticker-chip wouldn’t stick to my silicone cap so I had to shove it in my suit.. awesome). Done. So incredibly done. Finished in 5 hours and 53 minutes, just under the 6 hour cut-off (the three people behind me made it as well). My kayaker then towed me back to the boat ramp where I could exit the swim. 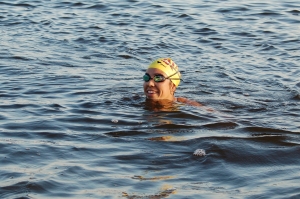 Here is where my only real complaints about the race come in: since I was one of the last ones finished, there were not many people left at the marina. My kayaker and I had to pull her yak out of the water by ourselves after using our arms for almost six hours; there should’ve been help. The massage people were closing up shop and refused to help out the last few swimmers and the only food available was some fruit and cookies (maybe there had been more earlier on, I’m not sure).. more carbs would’ve been appreciated. With that being said, the race was incredibly organized, well run and very safe (important). At one point in time, there was a rogue boater coming at us full-speed. The Coast Guard went chasing after him, blaring their sirens and ordered the boat to maintain no-wake to protect the swimmers. It was great knowing the Coast Guard and local authorities were on the lookout the entire swim. Additionally, everyone I met was incredibly nice! The water was so clean and clear; it was beautiful.

Will I do this again? Probably not as a solo swimmer, but that’s just because I’m not committed to the training right now. I’m in for next year as a relay though, if anyone is interested!